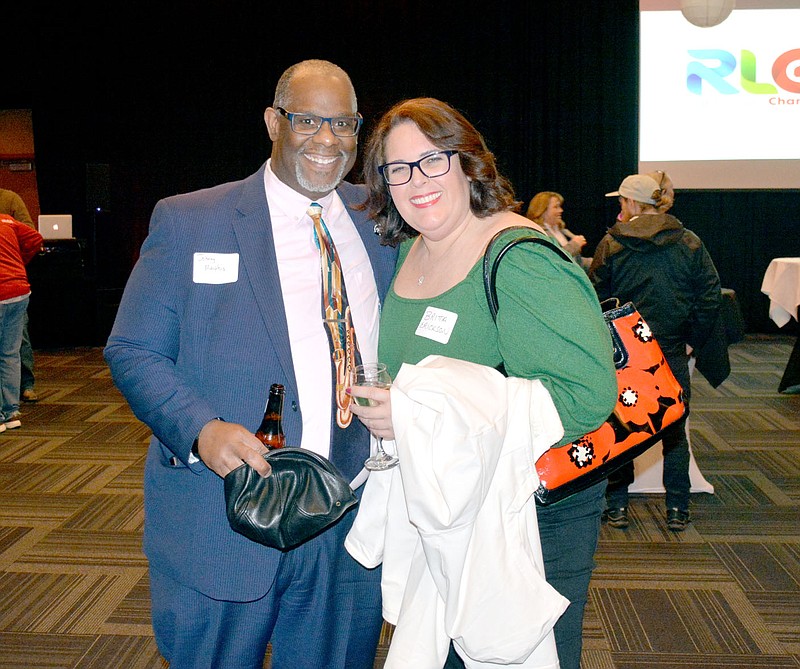 Marc Hayot/Herald-Leader Johnny Mathis (left), the regional director of player development for Choctaw Casinos and Britta Erickson, the regional director of marketing for Choctaw Casinos ventured up to Cherokee country for Benton County Business After Hours on Thursday at the Cherokee Casino and Hotel West Siloam Springs. Choctaw Casinos is also a member of some of the Northwest Arkansas chambers of commerce, Mathis said. During the evening, Mathis won $100 from the punchboard, Cherokee Casino's prize-offering game during the event.

The event is held on a regular basis, according to Raymond Burns, president and CEO of the Rogers-Lowell Area Chamber of Commerce.

An estimated total of 250 people attended the event, according to Arthur Hulbert, president and CEO of the Siloam Springs Chamber of Commerce.

"We were happy to bring this fun networking annual event to our community this year as it brought many business leaders from Northwest Arkansas and Northeast Oklahoma to Siloam Springs for the first time allowing them to see the great things Siloam Springs has to offer," Hulbert said.

Restaurants from the casino's new food court catered the event and two showgirls graced Benton County Business After Hours to assist with the punchboard.

Benton County Business After Hours was co-sponsored by Black Hills Energy and Integrated Medical. Both co-sponsors had tables set up for attendees to visit. Along with the punchboard, Cherokee Casino also loaded the player cards of the attendees with $10 of Freeplay. Attendees had the chance to also win prizes from the three chambers of commerce.

Four attendees were given the chance to win between $100-$500. The attendees who had the chance to compete were Amanda Johnson, the owner of Bumbles & Boots Custom Creations; Deanna Crook an independent realtor; Chris Roberts and Johnny Mathis, the regional director of player development for Choctaw Casinos.

Each donned red boxing gloves and a red boxing robe and were given the chance to punch a number on the board. Roberts won $250, while the others won $100.

"It's a great opportunity for our members to get together and ring in the new year," Burns said.