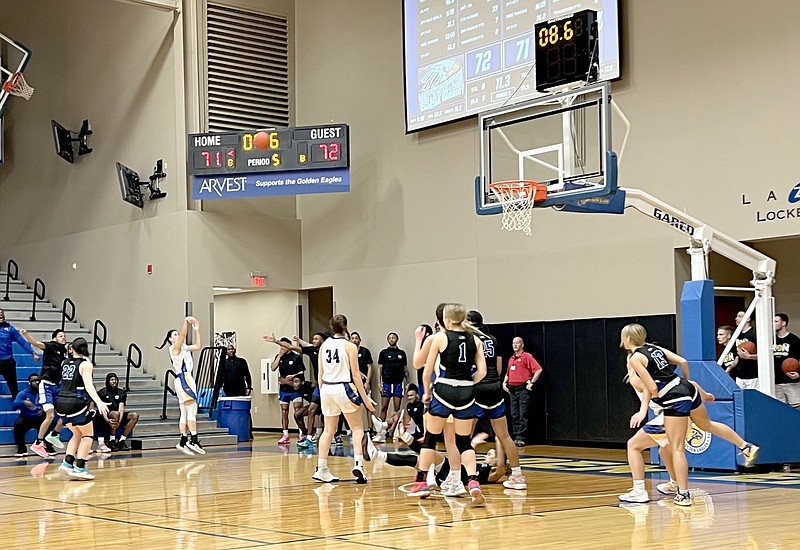 Graham Thomas/Herald-Leader John Brown junior Natalie Smith launches a 3-pointer near the end of overtime, but the shot was wiped out by an offensive foul as JBU fell to Southwestern Christian 75-71 Saturday at Bill George Arena.

John Brown's women rallied from a 10-point deficit in the fourth quarter to force overtime against Southwestern Christian (Okla.) on Saturday.

Unfortunately for the Golden Eagles, their luck ran out in the extra time period.

Trailing 72-71 with 12.4 seconds left in overtime, John Brown had possession of the basketball coming out of a timeout and drew up a play for Tarrah Stephens to drive to the rim, and if the shot wasn't there to kick out to an open shooter.

That's just what Stephens did as she drove the left side and found Natalie Smith in the corner for a 3-pointer, but the shot was wiped out by an offensive foul call on Stephens with 8.6 seconds left.

"We ran the play at the end exactly as I had it drawn up," said JBU coach Jeff Soderquist. "Tarrah can drive and get to the rim. If she can't get to the rim, we're going to have a 3-point shooter on the side. I mean I don't know, I'll watch the tape, it could have been a good call. I wasn't watching the play. I was watching to see if Natalie was open and she was. It could have been a good call, we'll see."

The Golden Eagles fouled Tresha Yager with 7.2 seconds left and sent her to the free-throw line. Yager hit the first of two foul shots and missed the second, but SCU's Christina Jenkins, who had 16 points and 11 rebounds, swooped in for the offensive board and was fouled with 5.8 left.

Jenkins hit both foul shots to set what would be the final score.

"Of course we're excited to get out of here with a win," said Southwestern Christian coach Mark Arthur. "JBU is always so well-coached, and in my opinion, they're the hardest team in the conference to guard. We struggled early, and then I think we figured it out a little bit later and just settled in and did a nice job after that first quarter defensively."

John Brown (11-6, 5-6) was in control early leading 16-9 after the first quarter and taking a 21-9 lead in the second quarter after Emily Sanders hit a jump shot.

Emily Smith hit a 3-pointer on the wing for a 26-15 lead later in the second quarter, but the Golden Eagles went cold offensively, only scoring two points the rest of the quarter and remaining without a bucket until midway through the third quarter.

In between, Southwestern Christian went on a 23-2 run to take control of the ballgame.

Still, down 50-40 in the fourth quarter, the team managed a rally.

Down 57-53, inside the final 40 seconds, Sanders hit four straight free throws to the time the game at 57 and send the game into overtime.

"Our girls did a good job clawing back in there, getting us into overtime," Soderquist said. "We could have given up and we didn't. At times we hit some key shots to get us into overtime."

Case missed a 3-pointer on SCU's turn with the ball, but SCU grabbed the offensive rebound and Case fired again from long range and connected for a 62-57 lead.

Following a JBU turnover, Yager had a driving bucket to put SCU up 64-57. SCU would later go up 67-60 on another 3-pointer from Case, who came into the game having hit 6 of 27 from 3-point range all season. She hit 4 of 6 against JBU.

"She played really well," Arthur said of Case, who hit 12 of 19 from the field overall.

Sanders answered with a three, and Smith had a three-point play to bring JBU within 70-66.

Stephens led JBU with 24 points, while Sanders had 13 and Bella Irlenborn 10.

The Golden Eagles are back in action Thursday at Science & Arts (Okla.) before playing conference front runner Texas Wesleyan on Saturday.

OKLAHOMA CITY -- The host Evangels boasted a 25-10 lead at the end of the first quarter that was too much to overcome as the John Brown University women's basketball team fell in 71-60 fashion to Mid-America Christian (Okla.) on Thursday night (Jan. 12) inside the Gaulke Activity Center.

The Golden Eagles received a career-high 17 points from graduate student Maci Mains off the bench on five triples and 6 for 10 shooting, while senior Tarrah Stephens converted 6 of 9 from the field to finish with 13 points. Senior Lisa Vanoverberghe led all players in caroms, securing 12 of John Brown's 33 rebounds in the setback.

JBU shot 43 percent (23-of-54) from the floor but that was due to the furious comeback efforts in the second half. In the first half, the visitors were limited to 8-of-27 (30 percent) from the field and attempted just five free throws – hitting three – in its first loss of the 2023 calendar year.

Jaci Littell led a trio of Evangels (13-3, 7-3) in double-figure scoring with 18 points, all from behind the arc, with Whitney Outon adding 15 points and nine rebounds. Aneli Thomsen provided 10 points.

Junior Natalie Smith's triple tied the game at five apiece early on but the visitors fell into a cold streak that resulted in just five points over the final 8:26 of the first quarter, shooting 2 of 10 from the floor and turning the ball over four times.

Meanwhile, Mid-America Christian knocked down 8 of 14 from the floor during the same stretch – including 4 of 5 from deep – to end the first quarter on a 20-5 run and a commanding 25-10 advantage.

John Brown outscored the Evangels 50-46 over the final three quarters and used a 14-2 rally late in the fourth to pull within single digits for the first time since the first quarter. Mains produced a triple and a layup, as did Vanoverberghe, during the rally. MACU hit 5-of-6 from the line, however, ending a comeback bid despite a Stephens layup and a final triple from sophomore Emily Sanders in the final eight possessions of the game.