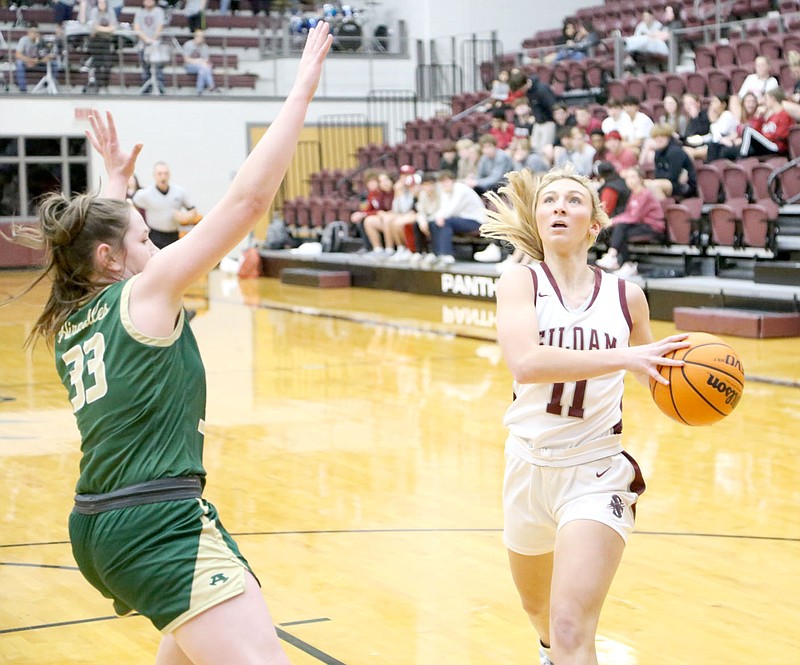 Mark Ross/Special to the Herald-Leader Siloam Springs senior Cailee Johnson drives in for a shot as Alma's Jordan Gramlich (left) defends on the play.

Siloam Springs wanted to keep Alma out of system on Tuesday, Jan. 19, and the best way for the Lady Panthers to do that was to play fast.

That's just what Siloam Springs did in picking up a 56-31 mercy-rule victory over the Lady Airedales in a 5A-West Conference game at Panther Activity Center.

"We want to push the ball and try to get up the floor," said Siloam Springs coach Beau Tillery. "We felt like we had a speed and athletic advantage."

Tillery emphasized that playing fast on offense starts with getting stops defensively, and then it's off to the races. He said the coaches told point guards Brooke Smith and Mimo Jacklik that they wanted to play fast.

"We want to push it down their throat and really run the floor well and get some chippies," Tillery said. "(Alma does) a very good job in the half court because they're bigger bodied and long and have some length in protecting the paint and making you score from the outside, so again we just wanted to push the ball, play fast and try to get up and down and get some chippies as much as we could."

Siloam Springs scored the first nine points of the game to take control.

Anna Wleklinski opened the scoring with a layup inside and then Emily Keehn went on a personal 7-0 run, on her way to scoring a career-high 21 points.

Keehn had two baskets inside with assists from Smith and Jacklik, and Keehn buried a 3-pointer on the wing for a 9-0 lead.

Brooke Ross scored on a putback and Keehn added another basket and Smith another assist as Siloam Springs took a 13-5 lead.

Wleklinski and Ross each hit jump shots and Faith Ellis scored to give the Lady Panthers a 19-13 lead after the first quarter.

Siloam Springs pulled ahead by 20 points in the second quarter 35-15. Ross opened the second with a 3-pointer at the top of the key and she hit another in nearly the same spot for the 35-15 lead. In between, Cailee Johnson scored, Keehn had another transition basket and Smith and Keehn each hit 3-pointers with Keehn splashing hers down in the corner.

"That's her go to shot when she's shooting threes," Tillery said of Keehn's corner trey. "She had a phenomenal offseason. Just the kid works her tail off and wants to be in the gym, asks questions all the time and is just trying to get better as much as she possibly can."

Alma went on an 8-0 run at the end of the first half to close within 35-23 at halftime. Haven Welch scored inside, while Halenda Dugger hit a 3-pointer and Jaden Gramlich also had a basket.

The Lady Panthers shot up Alma's defense to start the second half.

Jacklik hit a pair of 3-pointers and Keehn hit another three in the corner and scored inside as Siloam Springs went up 46-25.

Jumpers from Smith, Ross and Wlelkinski led to Siloam Springs taking a 52-25 lead going into the fourth quarter.

Baskets from Wleklinski and Keehn to open the fourth quarter gave Siloam Springs a 56-26 lead, and the final 5 minutes, 28 seconds were played with a running clock.

Ross added 12 points for Siloam Springs, which won its fifth straight game, while Wleklinski had eight, Jacklik six, Smith five and Ellis and Johnson each with two.

Daimya Parker and Zoey Kimes each had six points to lead Alma.

Greenbrier's Ashlynn Newton converted a three-point play to open the game, but Greenbrier wouldn't score another point until late in the second quarter.

Siloam Springs, meanwhile, went on a 23-0 run to take control and eventually win its sixth straight game 52-21 on Friday, Jan. 13, at Panther Pavillion in Greenbrier.

A host of Siloam Springs Lady Panthers (10-7, 3-0) got involved in the 23-0 surge. Mimo Jacklik started with a jumper and Emily Keehn added a basket inside.

Jacklik hit a 3-pointer to go up 7-3, and she and Brooke Smith added baskets inside and Faith Ellis scored on a putback.

Smith swished a short jump shot for a 15-3 lead after the first quarter.

Brooke Ross scored the Lady Panthers' first two baskets of the second quarter and Keehn had a steal and score for a 21-3 lead.

Siloam Springs increased its lead to 43-18 in the third quarter and hit the 30-point sportsmanship rule when Addison Pilcher hit a 3-pointer in the fourth quarter.

Despite the big win, coach Beau Tillery said the Lady Panthers could have been better.

"Thought we could have played a little cleaner," Tillery said. "Sloppy and sluggish on both ends I felt. Good teams have got to find ways to win ugly games too. We're going to have to be much sharper next week. Big week in terms of conference standings."

Smith led Siloam Springs with 12 points, while Jacklik and Keehn each had 10, Ross nine, Ellis and Cailee Johnson each with four and Pilcher three.

The Lady Panthers faced Greenwood on Tuesday, Jan. 17, with first place in the 5A-West on the line. Results were not available at presstime.

Siloam Springs travels to Russellville on Friday, Jan. 20, followed by a road game at Van Buren on Tuesday, Jan. 24. 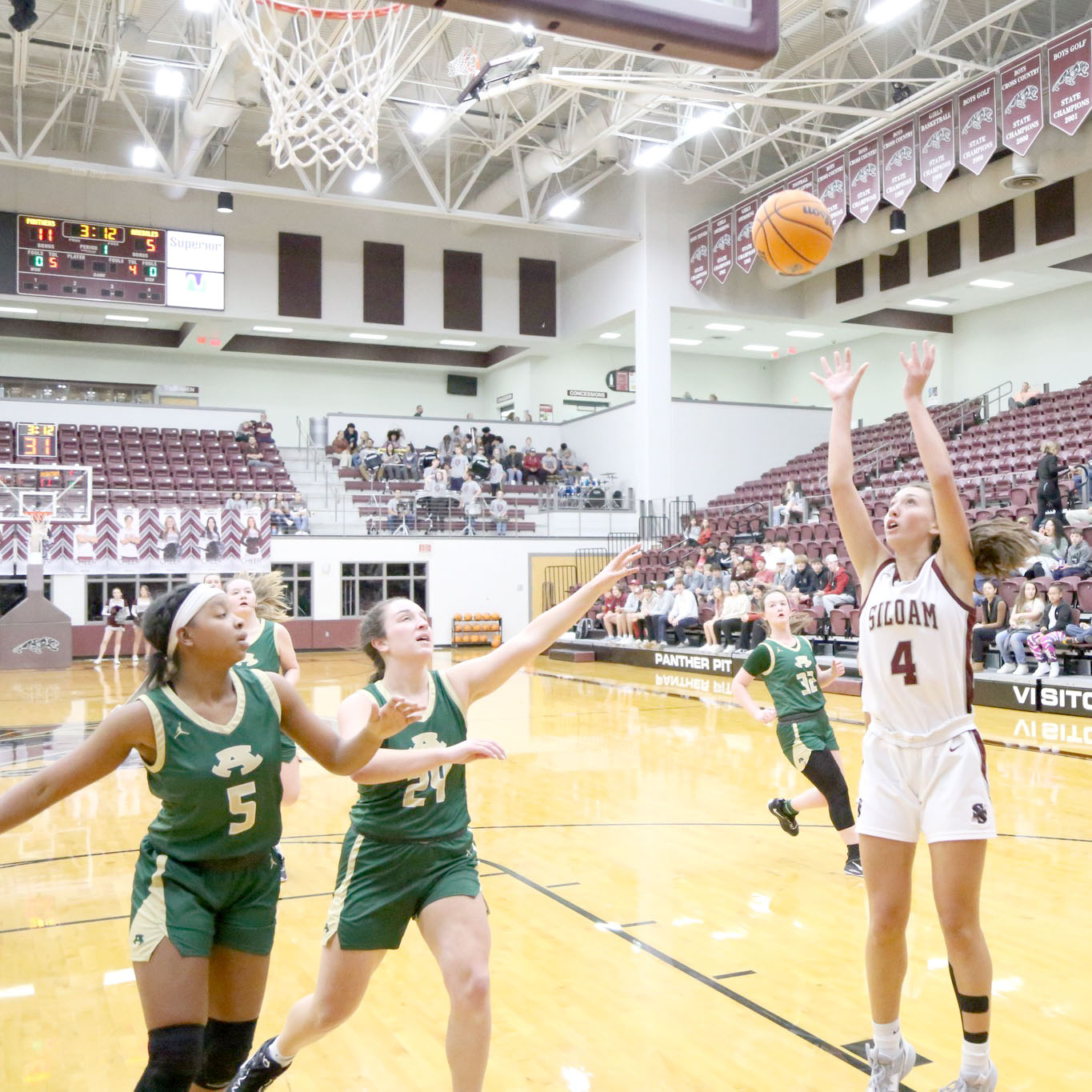