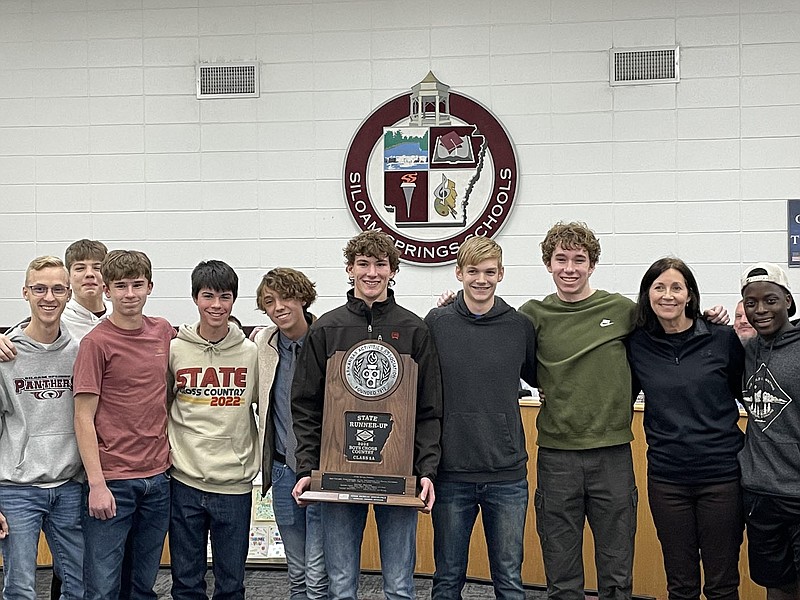 Spencer Bailey/Herald-Leader Coach Sharon Jones and the High School Boys Cross Country team were celebrated at the January school board meeting for receiving the 5A State Runner Up title.

The Siloam Springs School board meeting Jan. 12 began with the pledge of allegiance after the board unanimously agreed to begin all meetings with the pledge in December.

Celebrations began with an official recognition of school board appreciation month, which included Chamber of Commerce president Arthur Hulbert awarding each board member with a certification of appreciation.

"I'm of course here representing the business community, but also as a dad who has had a couple of daughters graduate from this district. I want to thank you all," said Hulbert.

The board also celebrated coach Sharon Jones and the high school boys cross country team for receiving the 5A state runner-up title.

"The quality of kids that we get in cross country is like no other," said Jones.

One patron, homeschool parent Derrek Arce, spoke at the meeting.

Arce spoke on behalf of other homeschool parents in the community in asking the school board to end the policy that requires homeschool students to enroll in one class in the district in order to participate in extracurriculars.

"I wanted to recommend a change to the policy and see what else could be done about it," said Arce. "I know that lots of local homeschool families are interested in getting their teenage kids involved, but this policy is a stopping point for them."

After comments from Arce, Assistant Superintendent Shane Patrick gave his report, which included an update on the new administration building, which is reportedly on schedule and on budget.

"There is a lot of work going on out there right now, and our guys are staying on top of it," said Patrick.

The board then moved on to unanimously approve a motion for the school district to move a maximum of $12 million into an investment account with Arvest wealth management, which should yield hundreds of thousands of dollars for the district.

After a lengthy executive session for the purposes of evaluating the superintendent, the school board unanimously voted to extend Superintendent Jody Wiggins' contract for another three years.

"We are proud of Mr. Wiggins and we are proud of the job he does and the leadership role he fills," said school board president Brian Lamb.

"We got you for a few more years," added Lamb.