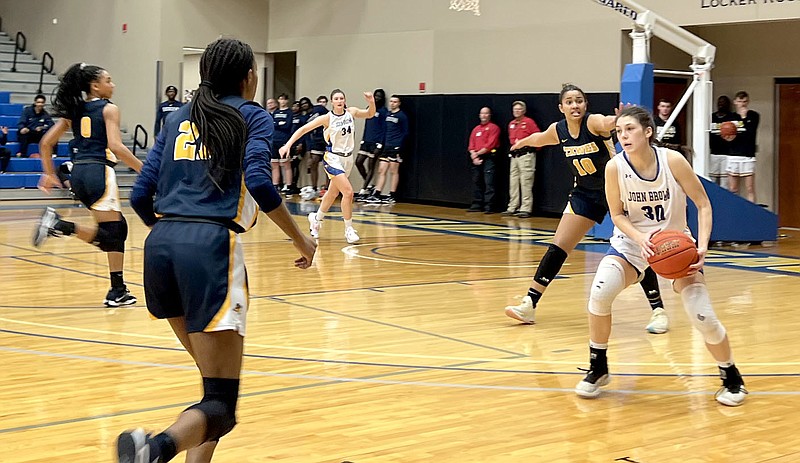 Tarrah Stephens and John Brown were not going to be denied on Saturday against one of the top teams in the nation.

Stephens scored a season-high 29 points and the Golden Eagles rallied from a slow start to hand No. 17 Texas Wesleyan its first conference loss and end the Rams' 17-game winning streak with an 83-70 victory inside Bill George Arena.

"It feels really good," said Stephens, who also had eight rebounds. "We were really excited going into this game. We were really wanting to beat them because we felt like when we played them at their place that we could have played better. Getting that win here was really exciting."

"Actually watching the video tape of playing them down there, we actually offensively played pretty well down there," said JBU coach Jeff Soderquist. "We scored 75 points. They went on a barrage of 3 pointers that they're not known to do. They hit 15 threes on us. ... I just thought they can't do that again.

"Spreading out trying to stop threes was not in our favor. They're just so good driving to the basket that we still packed it in. This time we did mark who their shooters were, so I thought we did a little bit better job on them."

Stephens had six points in that surge and Gracie Harris and Emily Sanders hit 3-pointers.

Texas Wesleyan briefly took a one-point lead in the second quarter, but another 3-pointer from Sanders got the lead back for JBU, and the Golden Eagles never relinquished it.

Harris canned back-to-back 3-pointers as the Golden Eagles went up 32-26, and Maddie Altman splashed a trey of her own for a 35-26 lead.

Texas Wesleyan trimmed the JBU lead to one with a 6-0 run to start the third quarter, but again the Golden Eagles responded.

Sanders knocked down a 3-pointer on the wing to get the lead back to four, and every time the Rams would get close JBU would have an answer.

Texas Wesleyan pulled within 48-47 later in the third on a jumper by Taryn Wills, but Natalie Smith canned a 3-pointer to get the lead back to 51-47.

Stephens completed a three-point play at the end of the third to put JBU up 58-51 going to the fourth.

"Tarrah Stephens played very well for (John Brown) tonight," said Texas Wesleyan coach Brenita Jackson. "She did exactly what we said she was going to do. And the rest of them chipped in and got on the glass. I thought they played very well."

JBU outscored Texas Wesleyan 25-19 in the fourth quarter, pulling ahead by double digits and holding off the Rams' final rally.

"My team missed shots that we normally hit, a lot of layups and just was very stagnant offensively, but I think a huge part of that was John Brown asserting themselves against us and we didn't adjust," Jackson said. "They hit shots when they needed to. They shared the ball well. They made us work defensively, and it kind of wore us down a little bit on the defensive end."

Along with Stephens' 29-point performance, three other players scored in double figures for the Golden Eagles.

Sanders finished with 16 points, while Smith had 13 and Harris 11 off the bench.

John Brown's Tuesday, Jan. 24, game against Oklahoma City was postponed to Tuesday, Jan. 31, because of winter weather. The Golden Eagles are scheduled to host Central Christian (Kan.) on Thursday before playing at Langston (Okla.) on Saturday.

CHICKASHA, Okla. -- The Golden Eagles pieced together a 14-6 late in the fourth quarter and teed up a possible game-tying triple, but the shot wouldn't fall, allowing No. 19 Science & Arts (Okla.) to escape with a win Thursday night (Jan. 19) inside Drover Fieldhouse.

Facing a nine-point deficit with 6:36 left in the contest, Sanders hit a layup and the Golden Eagles produced back-to-back triples from Stephens and graduate student Maci Mains to kick off a 14-6 rally that pulled the visitors within one, 64-63.

After Sanders converted a pair at the line, John Brown was forced to foul with 11 seconds remaining, producing a three-point deficit, 66-63, with possession of the ball. Junior Natalie Smith couldn't hit her fourth triple of the evening that would have tied the score, and the Drovers sealed with the win at the line after JBU was forced to foul.

USAO's shooting dropped significantly in the second half (32 percent), but the hosts ended hitting 25-of-58 (43 percent), compared to John Brown's efficiency which fell to 25 percent in the fourth quarter -- despite the rally -- that ended at a 36 percent (21-of-59) rate.