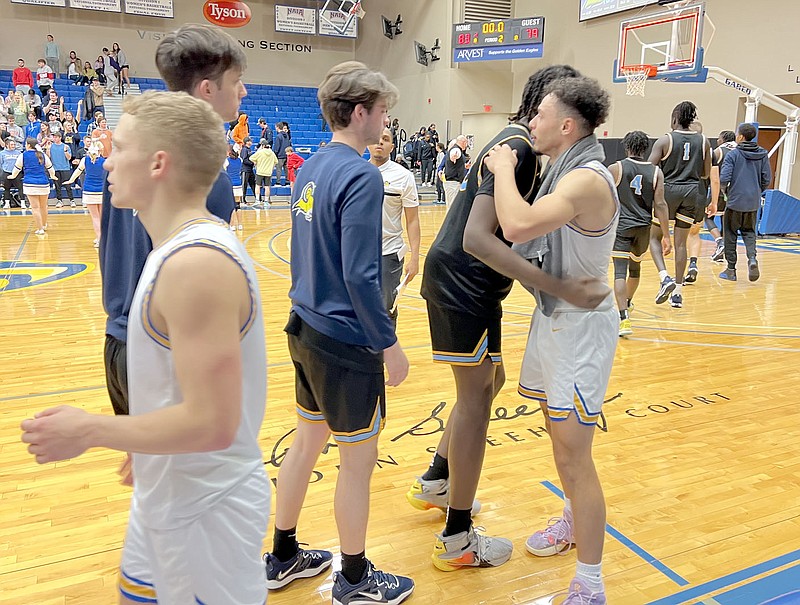 The John Brown men's basketball team is finally healthy and the results are starting to show.

The Golden Eagles won their second straight game Saturday, this time taking down Texas Wesleyan 83-79 in front of a lively crowd inside Bill George Arena.

On Thursday, Jan. 19, the Golden Eagles blew past Science & Arts (Okla.) in Chickasha, Okla., 90-63, and on Saturday they led most of the way against a bigger, more physical Rams squad.

"It's a hunt, we're on the cusp," said JBU coach Jason Beschta. "The great thing is we've got a long ways to go. ... Both of these teams (Science & Arts and Texas Wesleyan) have been really good. Science has been really hot and Wesleyan has won five of its last six. They've been shooting the snot out of the ball."

Texas Wesleyan (11-9, 8-6) may have come in hot, but the Rams cooled considerably against the Golden Eagles' 3-point defense.

"We just played terribly undisciplined," said Texas Wesleyan coach Brennan Shingleton. "This is our fifth game in 10 days, and so we were a little tired."

The Rams were without injured guard Peyton Sallee, who averages 14.3 points per game and shoots 39.7 percent from long range and would have helped, Shingleton said.

But the Texas Wesleyan coach praised the Golden Eagles' effort as well.

"I mean all the credit to John Brown," Shingleton said. "They're playing well at the right time. Obviously they played well Thursday and carried over to tonight, so they were looking for confidence and they found it, and credit to them, they just played well."

Texas Wesleyan led 10-3 early, but John Brown quickly caught back up and took a 24-21 lead after Payton Guiot hit his first 3-pointer on the wing. Noah Taylor, James Beckom, Lukas Gabani and D.J. Ellis also had big baskets early to keep the Golden Eagles in it.

Beckom, who had a big night, scored a pair baskets inside as JBU led 30-25.

The Golden Eagles led the rest of the way.

Guiot hit another 3-pointer later in the quarter for a 33-25 advantage, and Tyren Collins and Beckom added buckets.

Guiot's basket at the halftime buzzer gave the Golden Eagles a 39-30 lead.

Guiot, Taylor, Malachi Reeves all hit big shots in the second half.

Taylor hit three 3-pointers in the second half, while Guiot banked in two 3-pointers on plays he thought he was fouled.

Meanwhile JBU's defense made the Rams work for everything they got.

"I just think we've been defending at a high level," Beschta said. "You look at tonight, coming into this game, we're up to second in the country in our 3-point defense. And we hold them to 4 of 23, and I think 1 of their first 17 or 18, they hit a couple late. I think some of that comes down to we can be so prolific shooting ourselves that we're on that all the time in practice. We've done a good job of taking that away, and when you do that you give yourself a chance in a lot of games."

Guiot finished with 22 points, while Beckom had 19 points and 10 rebounds off the bench. Taylor added 14 points off the bench, while Reeves and Collins each scored 10 points.

Rob Brown and Lamine Komara each scored 14 points to lead Texas Wesleyan, while Keyaun Hoskin and Akili Vining each had 13 and Juwan Jones 12.

John Brown's Tuesday, Jan. 24, game against Oklahoma City was postponed to Tuesday, Jan. 31, because of winter weather. The Golden Eagles are scheduled to host Central Christian (Kan.) on Thursday before playing at Langston (Okla.) on Saturday.

Senior Payton Guiot scored 20 points, passed out five assists and collected eight rebounds, while senior James Beckom came off the bench to provide 14 points and 10 boards – his third double-double of the season – to lead John Brown in rebounding. JBU enjoyed 37 bench points – accounting for over 40 percent of the scoring output.

"What a great game for us, against a very good Science & Arts squad," head coach Jason Beschta noted. "Our guys were locked in and competed at a really high level throughout the game. It was great to finally have a game with our entire team together again, but then to enjoy an evening where we continued to defend well and got hot scoring the ball.

"We were able to see so many different guys step in to make plays throughout the game. We know how dangerous [USAO] is at scoring in big spurts – and they made a run at us in the second half. I was so proud of the way we answered, stepping up to make the big plays needed for a big road win."

The Drovers primarily relied on getting to the line, shooting 9-of-14 through the first 16:41 of the game, to build a narrow 32-29 lead with 3:19 remaining in the first half. Then, Beckom's layup began a run that would return the lead back to the visitors, and for good.

Senior Tyren Collins produced a jumper and Beckom added another layup – and finished the three-point play – to end the Golden Eagle first half on a 12-0 run, building a 41-32 lead at the intermission. Then in the second half, the offensive efficiency continued.

Guiot opened the half with a triple, ending the run at 15-0, as the squads largely traded points until the Drovers pulled within five, 56-51. JBU then rode 11 points from Guiot and five points from freshmen Lukas Gabani and Josh Stewart to a 22-4 run that built a 78-55 lead for the visitors. The JBU defense produced stops on 11 of USAO's 12 possessions through the pivotal 5:05 stretch.

Six different players produced points down the stretch that eventually expanded into a game-high 27-point lead for the Golden Eagles, handing the Drovers its third consecutive loss.

John Brown finished 33-of-65 from the field (51 percent) and converted 14-of-19 at the line. USAO managed a mere 32 percent (21-of-66) effort overall from the floor, and relied on 16-of-21 shooting at the charity stripe to remain in contention before John Brown's lopsided run that effectively ended the contest.

Stewart finished 5-of-6 from the field to 12 points, and Gabani and senior DJ Ellis each netted 10 points. All three secured six rebounds each.