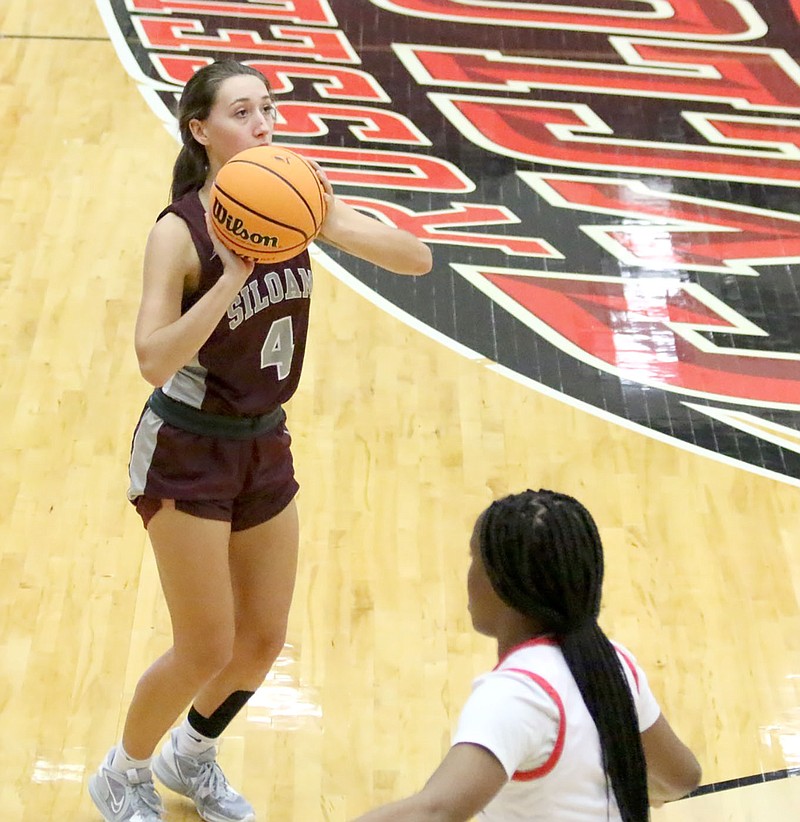 RUSSELLVILLE -- Siloam Springs' girls basketball team didn't get off to a great start in its game at Russellville on Friday, but the Lady Panthers sure enjoyed how it finished.

The Lady Panthers rallied from a 21-8 deficit in the first half and outscored the Lady Cyclones 43-21 the rest of the way in a 51-42 victory inside Cyclone Arena.

Siloam Springs, which trailed 16-5 after the first quarter, managed to cut the Russellville lead to 23-21 by halftime, aided by a 13-2 run at the end of the half.

Keehn and senior guard Sophie Stephenson gave the Lady Panthers (11-8, 4-1) the spark they needed in the second quarter.

Stephenson opened the second quarter with a jump shot to make it 16-7.

Russellville extended its lead to 21-8 after a basket by 6-2 post Taleigha Ealy, but Stephenson answered with a 3-pointer in the corner to make it 21-11.

"We call her 'Splash,'" Keehn said of Stephenson, who scored all eight of her points in the second quarter. "She does that for our game. She's a very important factor. We need that. She can come in there and knock down those important shots."

Russellville was no-guarding Keehn and Stephenson in the first half, and the Lady Panthers tried to stay in the flow of their offense rather than jacking up quick 3-pointers, even if they were wide open.

"Early on it was one pass and shoot it, which for a shooter is tough unless you're a D-I crazy good level," said Siloam Springs coach Beau Tillery. "We just tried to emphasize move the ball a little bit, let the those threes we're shooting from Keehn, Sophie and Anna (Wleklinski) be a little more in rhythm, a little later int he shot clock so it's not one pass and jack. Again as soon as we did that Sophie got hot for two to three shots and it was needed."

Zariyah Willis answered with a basket for the Lady Cyclones to make it 23-16, but wouldn't score again the rest of the half.

Brooke Smith hit a jump shot and Keehn hit a 3-pointer in the corner to pull to the Lady Panthers within 23-21 at halftime.

Keehn opened the second half with a 3-pointer on the wing to give Siloam Springs its first lead 24-23.

Russellville's Ealy and Willis scored two straight buckets to go up 27-24, but the Lady Panthers answered in a big way.

Brooke Ross got her first basket of the game on a putback and Brooke Smith had a steal and score and was fouled.

Ross scored inside and Smith added another basket as the Lady Panthers went up 36-33 at the end of the third quarter.

Russellville pulled within 36-35 to open the fourth quarter, but Keehn answered with an easy basket inside. She added another layup with 5:06 remaining for a 40-35 lead.

Brooke Ross swished a jumper for a 42-35 lead. Keehn knocked down her fourth 3-pointer of the quarter to make it 45-38.

Back-to-back inside baskets by Smith and Keehn gave Siloam Springs its largest lead at 49-38 with 1:48 left.

Faith Ellis later knocked down a pair of free throws with 24.6 left to give Siloam Springs a 51-40 lead.

After scoring 11 points in the first quarter, Siloam Springs didn't allow Russellville guard Brenna Burk to score the rest of the game.

"We just knew (Ealy), when she's not in foul trouble, is a load," Tillery said. "Even if you're in position she finds a way to catch the ball. She almost fell to her knees one time and was athletic enough to raise to her feet and still finish. Then (Burk) is as slippery and shifty as any guard in the league and really hard to stay in front of.

First-year Russellville coach Will Stewart, who won a state title at Norfork prior to joining the Lady Cyclones, said his team struggled offensively after the hot start.

Keehn finished with a career-high 23 points, while Smith had 10, Stephenson eight, Ross six and Wleklinski and Ellis each with two.

The Lady Panthers had the defending 5A champions and current No. 1 ranked team on the ropes, having rallied from a 14-point deficit in the second quarter to lead by seven late in the fourth.

But Siloam Springs was unable to score a point over the last 3 minutes, 7 seconds, and Greenwood staged a rally of its own.

Greenwood's Anna Trusty grabbed the rebound of her own missed shot and her second shot attempt with no time remaining lifted the Lady Bulldogs to a 60-58 victory inside Panther Activity Center.

The Lady Bulldogs came into Tuesday's game having won their previous three conference games by an average of 41.3 points.

It looked like Greenwood might run away from Siloam Springs early when it led 28-14 in the second quarter after a transition basket from Carley Sexton.

The Lady Panthers cut the deficit to 36-26 at halftime and came out on fire to start the third quarter.

Mimo Jacklik hit consecutive 3-pointers to pull Siloam Springs within 37-32. Anna Wleklinski banked home a field goal and Emily Keehn had a basket in transition to make it 39-36 and another trey from Jacklik tied the game at 39.

Trusty gave Greenwood the lead right back 42-39 with a 3-pointer, but Keehn answered with another basket inside on a feed from Jacklik.

Trusty hit a short jump shot to put Greenwood up 44-41 and Brooke Ross answered with a jumper to keep Siloam Springs close.

Sexton scored for a 46-43 lead but Keehn scored inside again and Ross scored before the end of the quarter to give Siloam Springs its first lead 47-46. The Lady Panthers outscored Greenwood 21-10 in the third.

"We've been a pretty heavy third quarter team," Tillery said. "We responded extremely well. We got down 10 in the locker room. With the coaching staff, we're like, 'Hey we're down 10, so we're just going to take some pressure to them and if we lose we're already down 10, and if we get back in it then it will be a ballgame and we'll scrap and claw and we're going to do some things,' and we did."

The Lady Panthers carried that momentum into the fourth quarter.

Ross splashed a pair of 3-pointers, the first at the top of the key and another in the corner as Siloam Springs went up 53-48.

Another 3-pointer from Jacklik gave Siloam Springs a 56-49 lead and, with 3:07 remaining, Ross hit a pair of free throws to put the Lady Panthers on top 58-51.

Siloam Springs' next five possessions, however, had three turnovers, an offensive foul on Brooke Smith, which fouled her out of the game, and missing the front end of a pair of one-and-ones. Greenwood capitalized as Tulsa signee Mady Cartwright hit four free throws and Kylah Pearcy scored. Pearcy hit a free throw with 1:11 left to tie the game at 58.

Both teams turned the ball over and Siloam Springs got possession with 24.4 seconds left. Greenwood fouled Sophie Stephenson with 22.1 left, but she missed the front end of the one-and-one, leading to the final play and Trusty's heroics.

"That's what we talked about in the huddle," he said. "Again they are who they are. They're going to be 1-3-1 or press or man, it wasn't like X and O stuff, it was like, 'Hey, you didn't think you were going to beat the No. 1 team in the state without adversity, so can you be clutch and handle the ball and rebound and take care of it and make free throws? And those were areas where we lacked in all three of those."

Trusty led Greenwood with 25 points, 18 of which came in the first half. Her only field goal in the fourth was the game-winner. Cartwright added 16 points for Greenwood.

"They're a very good team and (Trusty) had a heck of a game," Tillery said. "We were aware of her, but my gosh, we were thinking (Cartwright) would be the one. She's very good. Tulsa signee, so we focused on her a lot and (Trusty) came out and made everything."

Brooke Ross led Siloam Springs with 23 points, while Mimo Jacklik scored all 12 of her points on four 3-pointers in the second half. Brooke Smith scored all 11 of her points in the first half, Emily Keehn added 10 and Wleklinski 2. 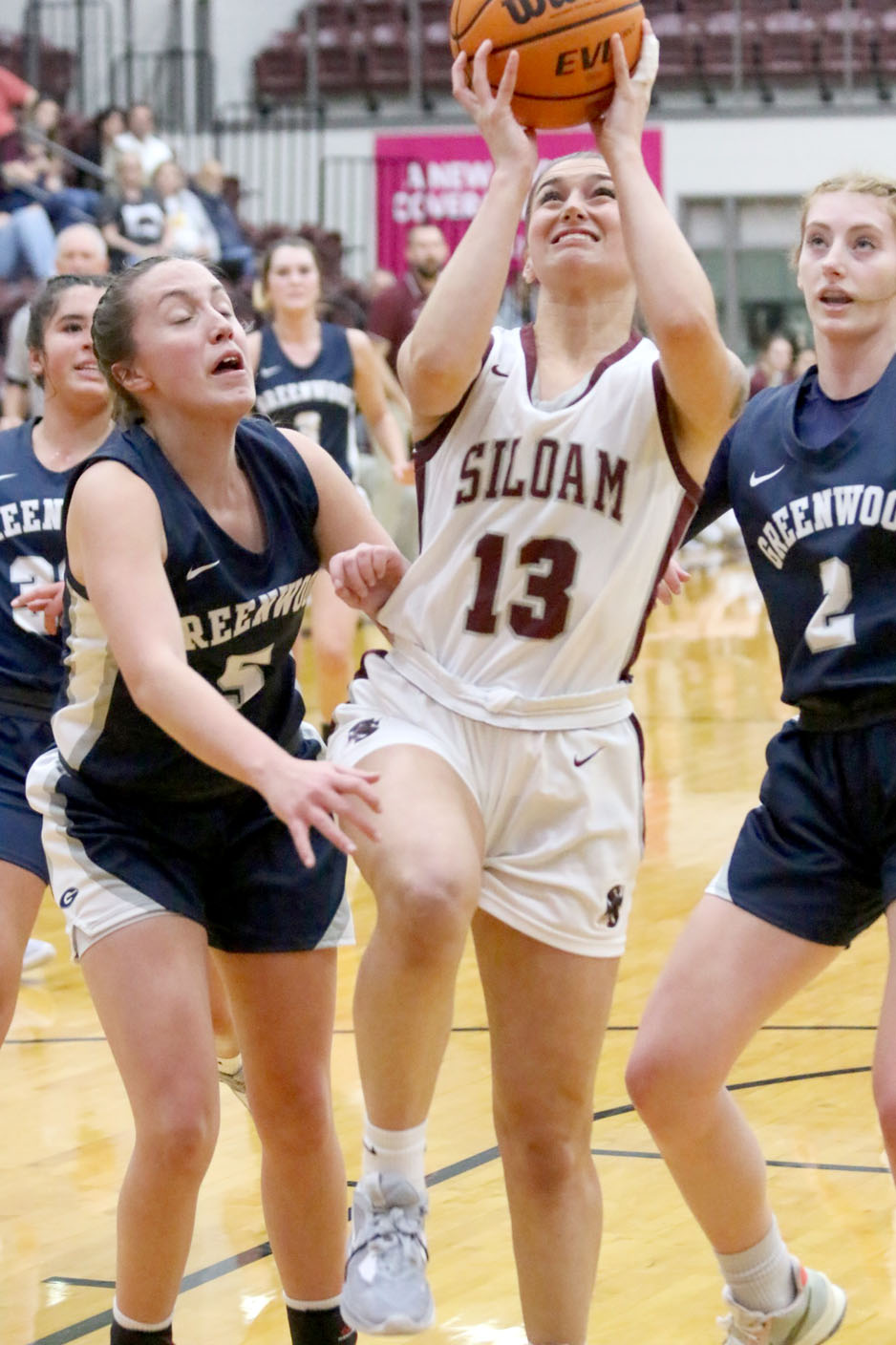