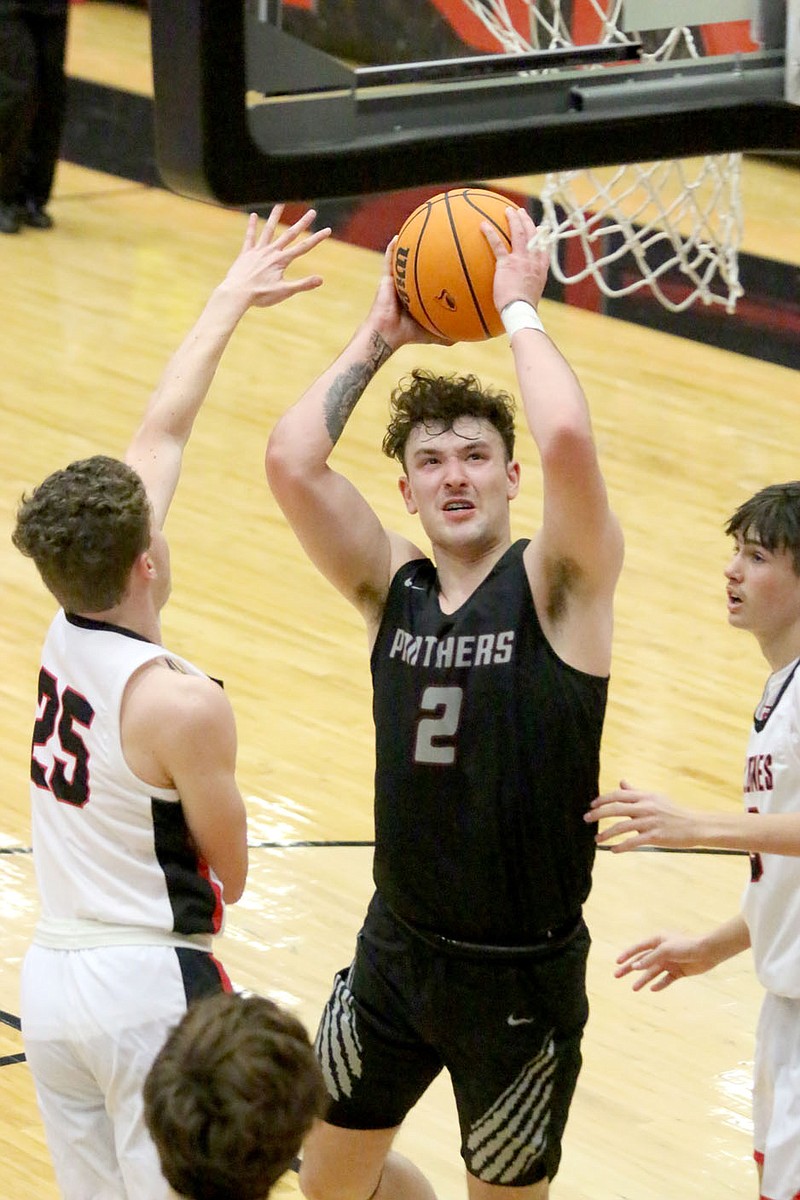 Mark Ross/Special to the Herald-Leader Siloam Springs senior Dalton Newman fights through Russellville's defense for a shot on Friday, Jan. 20, at Cyclone Arena. Newman scored 17 points as the Panthers defeated the Cyclones 45-38.

The Panthers picked up their first road win at Russellville since the 2016-17 season with a 45-38 victory Friday at Cyclone Arena.

Siloam Springs remained in a three-way tie for first place in the 5A-West with Harrison and Greenbrier, who all stand 4-1 in league play after Friday's games.

"We told the kids it's going to be a dogfight every night and for us to get it here is really good," said Siloam Springs coach Tim Stewart. "It wasn't perfect. There were some struggles through there, and we weren't patient at times, and then Russellville did a lot of good things. I don't know how many transition points (they had). But late in the game, we really solidified the defense and they had trouble scoring."

Siloam Springs led by as many as 10 points in the third quarter before Russellville stormed back with a 12-2 run to tie the game at 32.

Nate Vachon drilled a 3-pointer at the top of the key at the buzzer to give the Panthers a 35-32 lead entering the fourth.

After a sloppy start to the fourth, Russellville tied the game 35-35 on a 3-pointer by Kevin Foster Jr.

But it would be a while before the Cyclones (14-6, 2-3) would score again, struggling with Siloam Springs' defensive scheme, and the Panthers (12-7, 4-1) took full advantage.

Dalton Newman got the lead back on a basket off an inbound play.

The Panthers clung to the 37-35 lead until Vachon was fouled on a 3-pointer with 2 minutes, 55 seconds left, and he hit all three free throws to put Siloam Springs in front 40-35.

With less than a minute remaining, Newman scored inside for a 42-35 advantage for the Panthers.

Russellville's Wyatt Stalnaker hit a 3-pointer to end the Cyclones' scoring drought and make it 42-38 with 41.9 seconds left, but Siloam Springs closed out the game hitting three of four free throws -- one from Levi Fox and two from Vachon to pull away for the victory.

"Tonight was an all out battle," Vachon said. "Russellville, give them credit, I think they're the most athletic group we'll see all season. They were blocking shots. I'm pretty sure 50 percent of the shots that went up were blocked. It felt good to come out with a win against this group. Definitely excited to see them at home."

"For us to battle through (adversity) and be able to compose it and run some stuff late, it's a good win," Stewart said. "We haven't won here in a long time, so it feels good. Proud of the kids."

"That's been our problem all year long," he said. "We just struggle to find an identity on offense. If you can't score the ball you can't win games in this league."

The Panthers made just enough plays to hold off a resilient Greenwood bunch for a 63-60 win over the Bulldogs inside Panther Activity Center on Tuesday, Jan. 17.

Siloam Springs, which led by 12 points in the third quarter, could never put Greenwood away, as the Bulldogs trimmed the lead down to 59-56 in the fourth quarter after a 3-pointer from Landon Robbins, one of 10 3-pointers made on the day by Greenwood.

Nate Vachon and Nathan Hawbaker each hit a pair of free throws in the final minute as Siloam Springs went back up 63-57.

Greenwood's Aiden Kennon splashed one final three in the closing seconds to set the final score.

"Super physical, Donnie does a great job," Stewart said, referencing Greenwood coach Donnie Husband. "They had a good scheme and they hit a lot of threes. That wasn't the scouting report coming into the game but we're at the point now where we expect it from every team. It's going to be a dog fight. It was again. We have a lot of areas we need to improve on and show growth, but I was proud of the kids for battling and hanging on when the momentum had clearly shifted to Greenwood."

The Panthers rode a career-high 29 points from Nate Vachon, who hit five 3-pointers and knocked down eight of eight from the free-throw line.

"His motor has been just really, really good," Stewart said of Vachon. "We're super proud of how hard he's playing and still learning things every game. You can tell he's in a good place and wants to learn. He wants to get better. Obviously we know he can shoot but it's all those other things that are making a big difference for us, the rebounds, the tips, the taking charges. He took two charges tonight with his 29 points. That's a big deal. Super proud of him."

Vachon had 18 of his points in the second half, including a rare four-point play in the fourth quarter.

"Nate was great," Husband said. "He's always been a good player for them. He's always been really hard to guard. He shot the ball exceptionally well tonight. That's the problem when you play zone. You can open it up for one guy to really hurt you. We've kind of committed to doing that. We had a couple of bad breaks. Ball bounced out of our hands, bounced to him for an and-one. We lost him a couple of times, but at the same time, it's credit to him. Those are tough shots. He knocked them down."

Levi Fox banked in a 3-pointer at the first-quarter buzzer to give Siloam Springs a 20-18 lead after one.

With the game tied 25-25 in the second, Newman hit a 3-pointer to give the Panthers a 28-25 lead and Wilson Cunningham scored on Siloam Springs' next possession for a 30-25 lead at halftime.

Siloam Springs opened its largest lead in the third quarter.

Newman knocked down a 3-pointer on the wing for a 40-29 lead with 3:13 left in the third and Vachon scored on a scoop shot, was fouled and completed the three-point play for a 43-31 lead with 2:27 remaining.

The Panthers led 46-38 after Greenwood's Braden Bollman hit a 3-pointer at the end of the third.

It got even closer in the fourth, especially after Newman fouled out early in the final quarter. He finished with 15 points.

"Dalton fouled out too early," Stewart said. "We didn't do a good job with that. He's a big part of everything."

Greenwood finished with four players in double figures, led by Kennon's 14 points. Bollman and Dawson Holt each had 13 points, while Landen Robbins had 10.

It was another tough conference loss for the Bulldogs, who dropped to 5-13 and 0-4 in the league.

"We've been right there," Husband said. "We had opportunities. We just can't get over the hump for whatever reason. We can't get one shot to fall or one crucial rebound or whatever it is. We just can't get that one thing. We feel a little bit snakebit right now but to our kids' credit they're not hanging their head. They're continuing to battle and work hard and we're continuing trying to improve and get healthier and get a couple of guys back. I think it will make a difference."

Fox added eight points for Siloam Springs, while Jaxson Spence and Wilson Cunningham each had four, Hawbaker two and Cam Blackfox one. 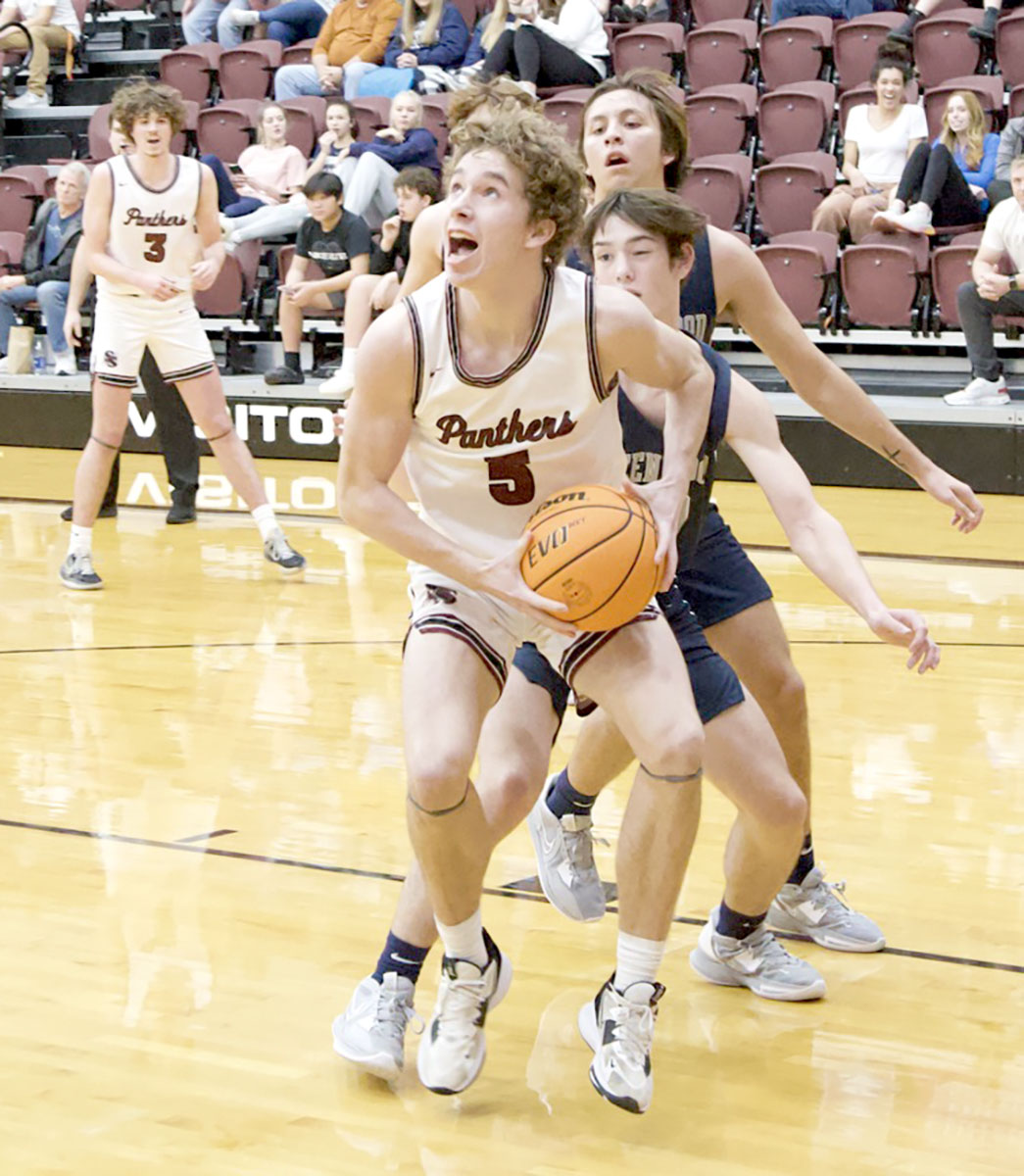